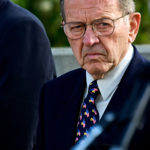 With the news this morning of former Alaska Senator Ted Stevens in a plane crash and his current status either unknown or not being released at this time, I thought I would repost a gallery of him that I made not too long ago.

It was confirmed today that former Alaskan Senator, Theodore “Ted” Stevens did die in the crash this morning.  He was 86 years old.  These images are available for media use from Zuma Press.