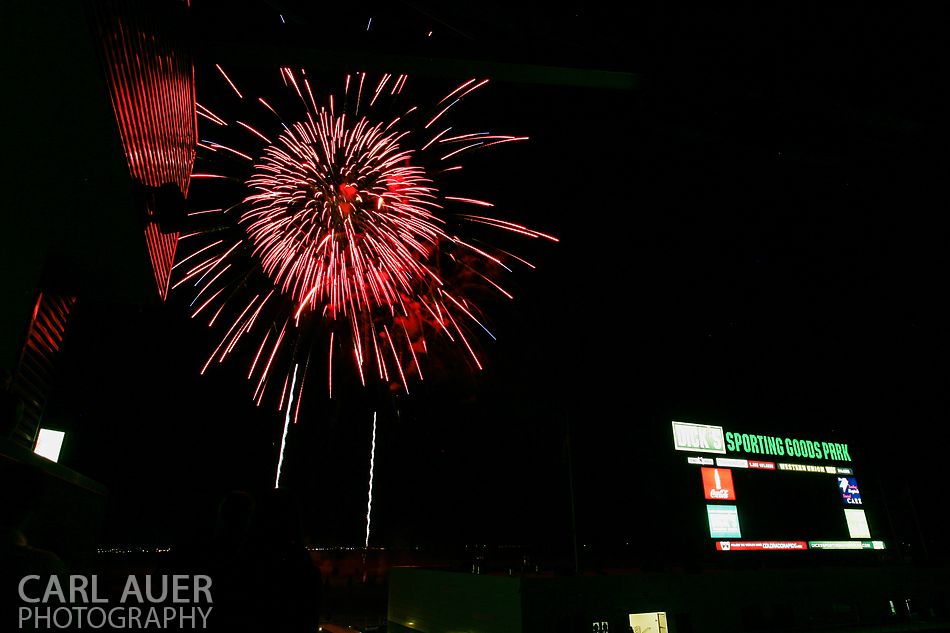 What a crappy day.  Hot all day, then started for the stadium as it began to rain.  I had my camera rain gear with me, but I did not have my me rain gear.  Thankfully, the rain blew past the stadium before the game started.  But it was still very humid, and honestly, I was not in the mood to shoot.  I brought my tripod because I wanted to get shots of the post game fireworks for Independence Day.  Last year I was so excited because I was going to get to see fireworks on the fourth for the first time in person after living 9 years in Alaska (to light during the summer for fireworks).  However, the 2012 wildfires in Colorado forced everyone to cancel their firework displays, and after this years wildfires, I was afraid that they were going to be canceled again… But the Rapids were going through with it, So I walked around a decided a good spot to shoot the display from would be the media balcony.  I could get overall shots of the people watching the fireworks, plus shots of the fireworks with the scoreboard in front.  I was wondering before the game how many people would stay for the fireworks.  I honestly was expecting the Rapids to drop this game to the Red Bulls.  While the Rapids are playing much better this year, the Red Bulls are currently in second place in the Eastern Conference, and I just figured it would be a loss, but the Rapids struck first in the second half and ended up winning the game 2-0 over the New York team.

Here are some photos.

There was not a lot of action in my corner for a lot of the game, and early in the first half I heard a helicopter.  I started looking around, expecting to see a low flying chopper working on a new fireworks caused wildfire, but while I could hear it, I just could not see it, but it was very close.  Then, suddenly from behind the stadium seats a airborne ambulance takes off.  I never heard what happened, but there had to be a reason it took off during the game so close to the stadium (it was right out front of the main entrance).

After blowing the helicopter shots (my shutter speed was way to fast since I was set up for action on the field, not over my head), I want back to try to find something good on the field, but the first half just was not doing it with both teams scoreless.

The second half started slow, with the Rapids going away from me.  I decided to shoot the Red Bulls on offense during the second half.  With them being a 2nd place team, I fully expected them to attack and score, but instead the Rapids knocked in two great goals.

Things started getting a little better as the team from New York was going into a desperation mode of play.  But every time the Red Bulls would go on the attack, they either turned the ball over or had it stolen or missed a rocket shot.

But finally action started coming my way, but in all honesty, I was thinking more of the fireworks.  I wanted to head up to the media room to download and transmit so I could set up for the fireworks, but I was not happy with what I had so far, so I kept shooting away.

Finally, I go a fun shot.  Right as I was getting ready to call it done, the Red Bulls had a deep pass just past one of their forwards who was onside and he gave chase.  But the ball was pretty far away from him high.  But as the ball was just about to take one final bounce and sail over the end line, he stretched out and was able to get his foot on it, and it made for a great shot.

So it was time to head up to the media room.  I had plenty of time to download, edit and transmit photos before the fireworks.  But then I saw my mistake and it was too late to change.  I had a great location to shoot the field, but I should have gone down to the field to the other end and shoot over all the people.  Why?

Because the fireworks were a lot bigger than I expected and the roof over the seating areas blocked half of the fireworks.  I was able to move a little, but it did not matter.  I was screwed.  I now know where to shoot from for next years fireworks….

I did like a few of the shots I got from the second location, but just not what I wanted..  Learn something new every day.

Photos are available for media use only through Corbis and NewSport Photo.