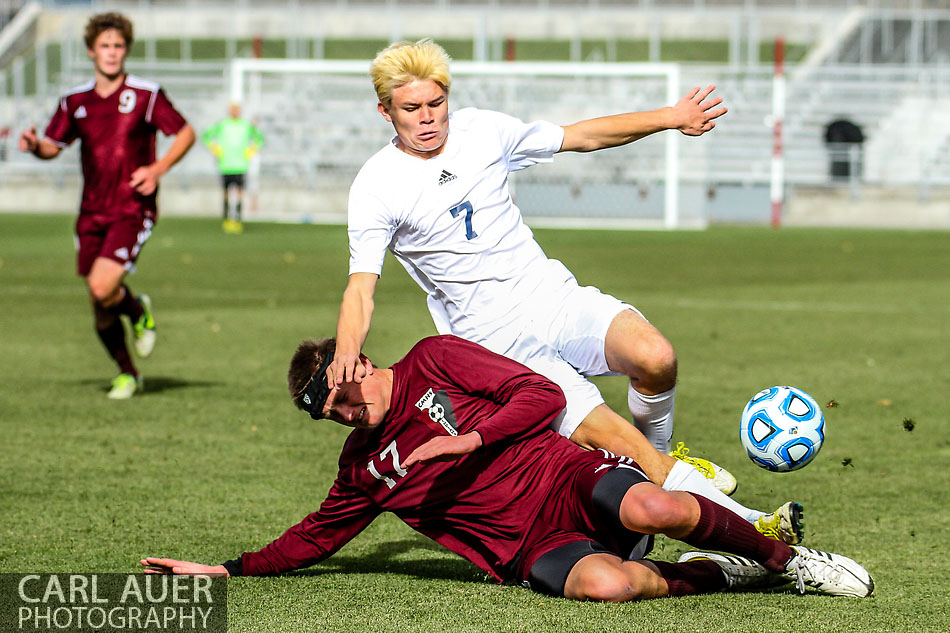 I got the opportunity to photograph the Colorado Boy’s Soccer championships for the second year in a row and this time around, I got to photograph all three games.  Last year we had a blizzard hit before the 5A game and that was pushed back to Monday, which was my mom’s birthday, so I had to bow out.  This year, the weather was perfect.  No possibilities for weather delays.

This year, the format was 4A, 3A, and 5A, so, with the 4A game up first, the Cheyenne Mountain Indians and the Air Academy Kadets took the pitch at Dick’s Sporting Goods Park in Commerce City, Colorado.

Cheyenne Mountain took a 1-0 lead minutes before halftime, and held that lead for most of the second half.  With about 6 minutes left in the game, the Kadets were awarded a penalty kick after a player was tripped in the box.  This tied the game, and I was beginning to think I was going to have another overtime game.  All season shooting at the North Area Athletic Complex I had multiple overtime games, and earlier in the season, Air Academy beat Cheyenne Mountain 3-2 in double overtime.  However, in the 77th minute (80 minutes in CHSAA High School Soccer regulation time), Cheyenne Mountain netted the game winning goal.  Knocking off the Colorado 4A #1 team and top seed to win the state championship is a good way to end a season.  Congratulations to both teams for phenomenal seasons and making it to the final game.

A great moment of good sportsmanship.  Both teams are from the Colorado Springs area and it is no doubt that many of the kids on both teams have played against each other or with each other as they grew up.  So seeing this was good to see.