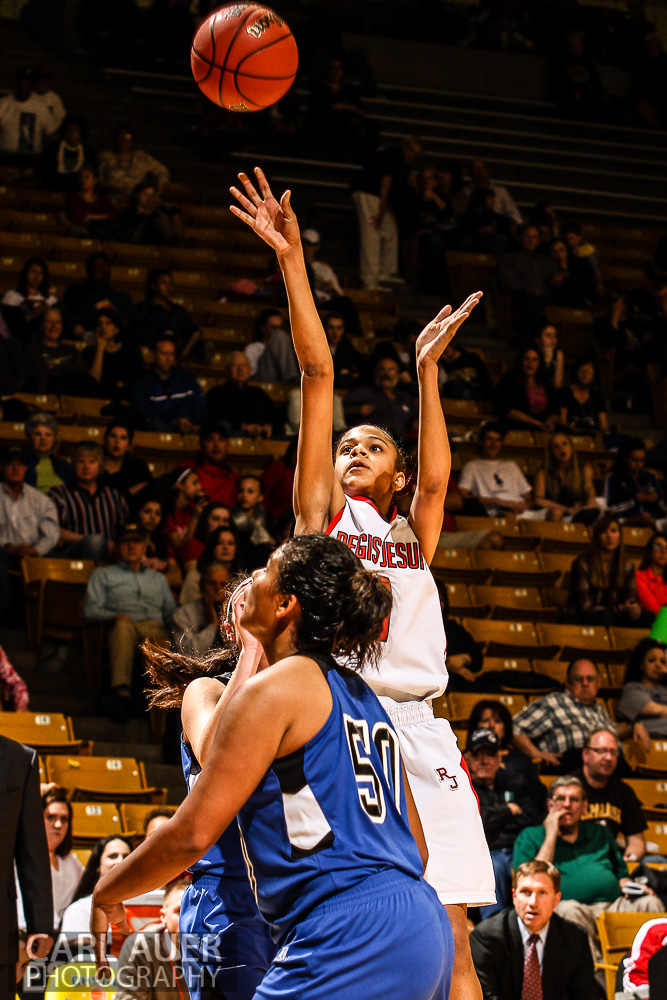 After the first two 4A games of the night, it was time for the 5A girls to take the court.  The first game was the Grandview Wolves against the Regis Jesuit Raiders and the final game of the night would be Arapahoe Warriors against the Highlands Ranch Falcons.

Like the 4A games, all four teams were number 1 seeds in the CHSAA Tournament.  In the first game, the Raiders and Wolves were well matched together.  The teams split the first half with Regis Jesuit winning the first quarter 12-10 and Grandview winning the second quarter 12-10.  This sent both teams into the locker room at halftime tied 22-22.  A great first half!

The second half was sure to be a good one.  Regis pulled ahead in the third quarter, out scoring the Wolves 11 to 9, but going into the fourth quarter trailing Regis 33-31, Grandview was within striking distance of the Raiders.  And even though I found I was going to have to tweak my strobe placement a little before the Boys games on Friday, I was getting pretty dialed in with my settings.  I was getting some great images from the 4 strobe set up in the Coors Events Center.

Unfortunately for the Wolves, Regis was just too much for them in the final frame.  The Raiders went on to out score Grandview by a score of 13-12 and advanced to the State Championship Game on Saturday with a 46 to 43 win over the Wolves.  It was a great game and had the Coors Event Center rocking.

In the final game of the night, the Highlands Ranch Falcons would take on the Arapahoe Warriors.  Of the girls tournament, both 4A and 5A, Arapahoe was the only team I had photographed during the regular season when they came into Arvada West and destroyed the Wildcats.

Arapahoe came out strong in the first quarter, taking a 16-15 lead, but after the opening frame, the Falcons took over.  In the second quarter, Highlands Ranch outscored the Warriors 14-11, taking a 29-27 lead into the locker room at halftime.

In the third quarter, the Warriors could not stop the offense by the Falcons.  Arapahoe was having problems finding the bottom of the net too.  Highlands Ranch won the third with a score of 14-8 and was leading by a score of  43-35 going into the final frame.  Arapahoe was going to have to play their best 8 minutes if they wanted to move on to the final game.

The fourth quarter was wild.  A high scoring affair.  Both teams were scoring at will.  Arapahoe had a phenomenal 4th quarter scoring 19 points, however, Highlands Ranch scored 21 points in an equally phenomenal offensive performance.  And the final for Saturday was set with the Regis Jesuit Raiders taking on the Highlands Ranch Falcons as the Falcons sent Arapahoe home with a 10 point loss, 64-54.

To view and purchase photos from these games head over to my Maxpreps galleries for the Regis Jesuit and Grandview game and the Arapahoe and Highlands Ranch game.