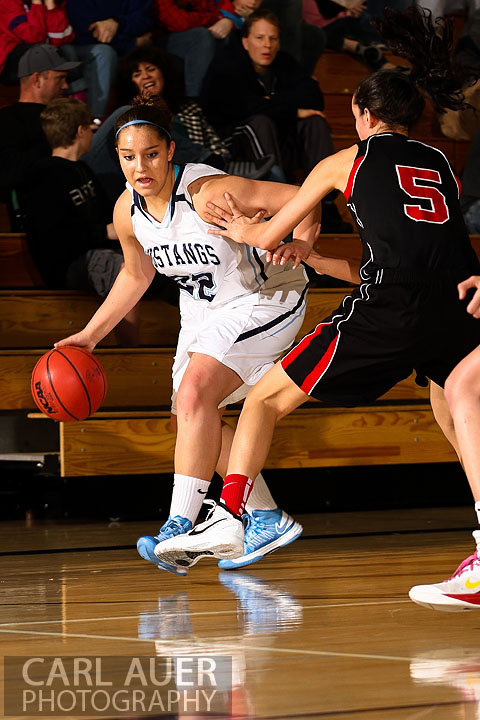 From the start the Ralston Valley Lady Mustangs showed why they had a 1st round bye.  RV out scored the visiting Lady Knights 19 to 4.  It felt like the Lady Mustangs were hitting three point shots every time down the court and Fairview could not stop them.

In the second quarter, the Lady Knights settled down and were able to put 9 points up on the board.  They were also able to hold Ralston Valley to 9 points.  The Lady Knights headed into the locker room at halftime trailing the Lady Mustangs by 15.

After halftime, something weird happened.  Two of the officials started calling the stupidest fouls against Ralston Valley, but unless Fairview did something totally blatant, and even then, two of the officials were able to call the foul against Ralston Valley instead.  For example, a Ralston Valley player grabbed a rebound and a Fairview player put her arms around the RV player and threw her.  The correct call would have been a foul against Fairview.  A incorrect call would have been a jump ball.  The call the refs made?  A blocking foul on the Ralston Valley player.  Really?  The Fairview girl grabbed the RV player from behind (going after the ball) and threw her 3 feet across the key and it was the RV players fault?

So, the third quarter went Fairviews way as they outscored the Mustangs 7 to 5.  The Lady Mustangs still led by a score of 33 to 20.  Would the Lady Mustangs be able to hold on in the 4th to move on to the next round?

To be fair though, the third and head official, was great.  I have seen her 2 or 3 times previously, and she is a fair official, calling the game equally with out any favoritism towards either teams.  However, she was not having any luck keeping her co-officials in check.

So, with a 46-33 win, Ralston Valley will face Palmer next in the Sweet 16.  With RV being a #1 seed, I fully expect I will see them in Boulder for the Final Four.

To view and purchase photos from this game, please visit Maxpreps.