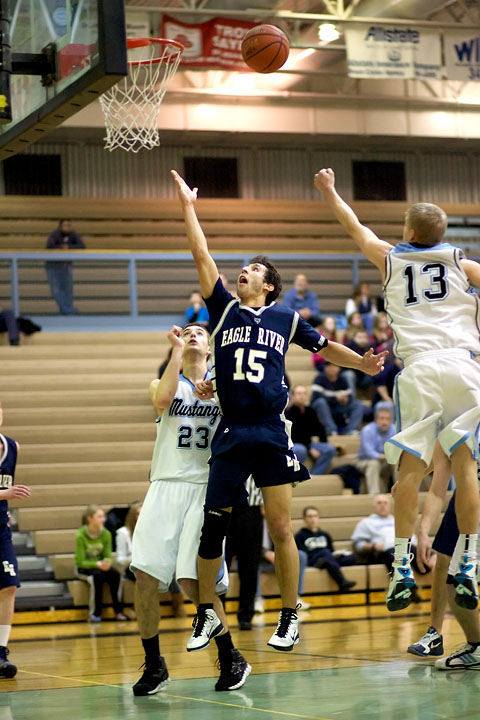 Eagle River traveled across town to face the Chugiak Mustangs.  Everyone was hyped for the game, it was time to bring the BirchBowl trophy home to ERHS.

Lets start off with the officiating.  I will give credit where credit is due.  While it was not the best called game, with quite a few “and one” fouls not called and a few travels that I thought were pretty obvious, it was one of the better officiated games the Wolves had all season.

The problem last night however was not the officials.  Last time these two teams met, it was even until the 4th quarter when the Wolves outscored Chugiak, 25-10 to win by 15.  Last night it appeared like the Wolves felt they had won the game even before it started.  Overconfidence was the Wolves downfall.

For the first couple minutes of the first quarter, the game looked good.  Like it was going to be neck and neck all night long, but it soon showed that Junior Kelechi Madubuko was not on his game, and the Wolves passing was filled with errors that led to turnover after turnover.  And Chugiak capitalized on those errors.  A first half low post move that resulted in a two handed dunk was punctuated later by a very decent two handed ally-oop.

The Wolves did show some life, with some clutch three pointers from Seniors Kyle Taylor and Branden Viotto, and some great inside play from Seniors Dominic Young and Nate Yaw, but the key passing that we saw in the first ERHS/CHS game was just not there.  The Wolves did not bring their A game, and Chugiak did.

The Wolves need to come together.  Bring some basics back to their game, like faking a pass, and get their heads into it.  There is no reason why the Wolves are at the bottom of the CIC other than they put themselves there.  They have the tallent and the ability to come out of the CIC tournament and head right into state, but they need that final come together piece to click.

This ends my recap of the Wolves hoops games for this season.  I will return to Wolves sports when baseball hits.  I hope you have enjoyed what you have read here.