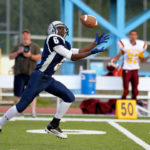 So there I am.  Hanging out on the sidelines during pre-game warm ups, chatting with football managers, injured players, coaches, cheerleaders, prepping myself for a Friday Night football game.  In Alaska in August, that means the sun is still up, but low, and here we were looking at some nasty direct light, but light does not bother me.  In fact, the light was kind of fun because it kept changing.  The game started with that harsh, right in their faces bright light.  For you photo geeks, we are talking ISO 100 at 1/5000+ shutter speeds with a 2.8 aperture.  Bright.  By the middle of the 1st quarter, clouds rolled in and we were at ISO 400 and 1/1000 shutters speeds, then rain and ISO 800, then the 4th quarter, clouds disappeared and we were back to ISO 400, but with a lot of shadows and golden hour light.  But the light was not an issue.  It does not bother me.  Sidelines were starting to get crowded.  Local paper writer with camera (miss seeing Dave and Dan on the sidelines, but that is another story), Anchorage Daily News shooter, Channel 2’s Kevin Wells, and a very pretty camerawoman from Fairbanks, which seemed odd since there were no Fairbanks teams, but I was not complaining, myself and everyone associated with the team, including 22 cheerleaders.  Lots of people to work around and throw the refs in and it gets a little crowded.  But, I had a job to do.  I continued to prep myself, checking exposure, getting some video capture for a end of season project, keeping my eyes on the team as they were warming up, looking for some sort of indication on what the game plan might be for the night.  It helps to know what plays are going on, so I can anticipate the plays and grab the best possible shots.  I do this every game and it works, but there has always been one shot that escapes me.

The reception.  I have lots of reception photos, great shots, but not the one.  I have plenty of shots of wideouts getting the ball in the air across the field, usually with one or two players in frame, usually between me and the reception, or the ball just too far away to show you it was caught, or after it is already in the hands of the receiver, or one with a ref totally getting in my way.  What I have been looking for is that perfect shot.  Full body, ball getting ready to fall in the hands of the receiver in full stride.  I came close the very first game of the season with this shot of an interception. 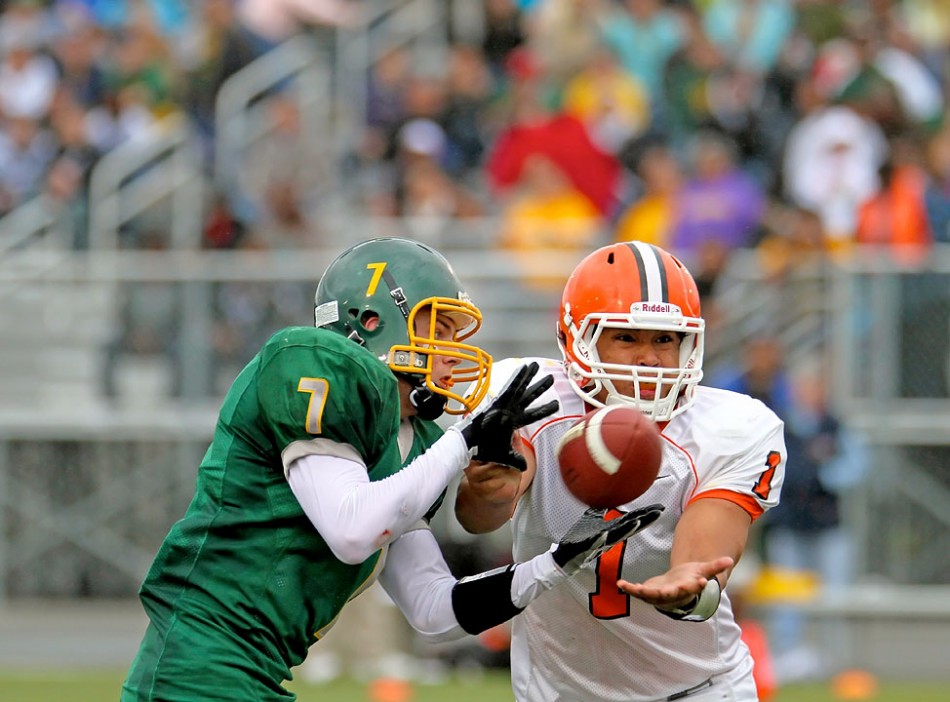 So the game started and it looked like it was going to be a running night.  Junior quarterback Kelechi Madubuko was doing a lot of hand offs and QB keepers, but not tossing the pill much.  Then, there it was, in the second quarter.  Madubuko was clear in the center of my frame with his arm loaded for a pass, and a deep on from how he looked.  I snapped a few pictures of him and swung the camera around.  While swinging around, out of the corner of my eye I saw a flash of blue and I got him in frame and started firing.  No line judges, no referee, nothing between him and me.  I did a quick check after the play was over and yup, it looked in focus, but never trust the LCD.  I continued shooting the game.  I got home and started dumping the photos onto my hard drive and going through them in Apple’s Aperture.  About 1100 game photos to go through.  One by one I go through them, quickly looking for keepers, maybes and junk.  Then I come to that clear shot of the QB, I could not wait.  I clicked the right arrow key a couple clicks to find a nice, sharp shot of wide receiver Jeavonte Dunn in full stride, looking over his shoulder (towards me) with the ball right there.  Yes.  Finally.  And here it is. 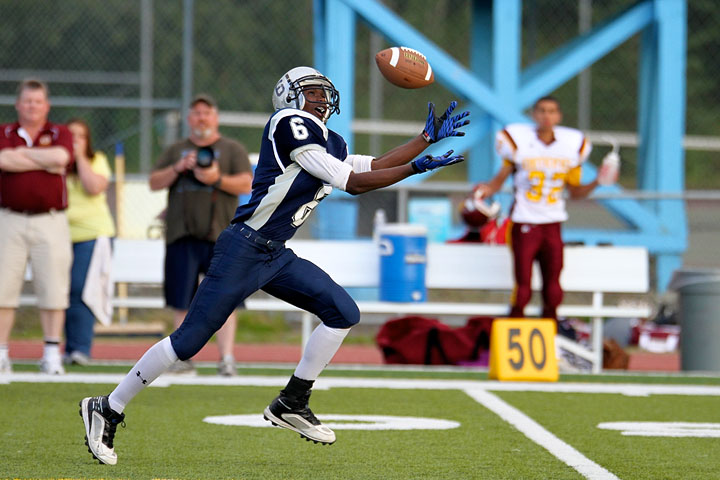 3 Replies to “Football – The Catch”