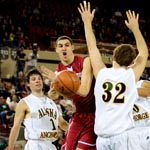 As we head into March Madness, I thought I would bring photos to view from the 2009 Great Alaska Shootout. All the 2009 Shootout photos are available for media use only through Icon Sports Media.

More shootout photos to come in the next few days as we head into Selection Sunday.