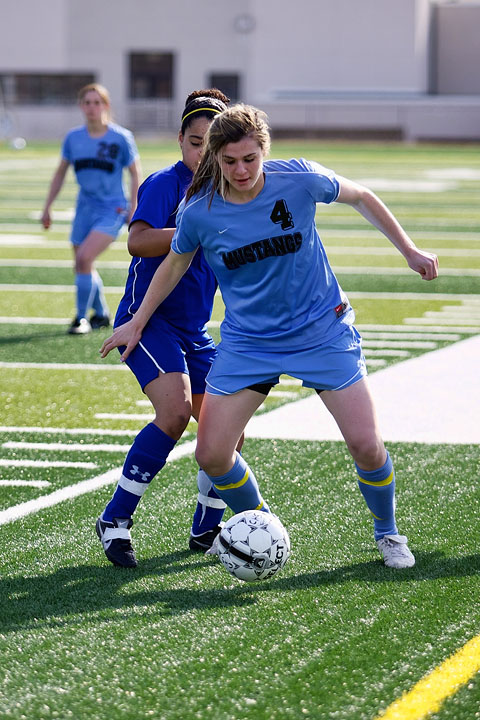 So, I get an email from MaxPreps.

“Do you have any photos of Kelly Cobb?  We are working on a story and need images.”

Kelly who?  I have lived in Eagle River for 7 years and really do not know the soccer scene, but I do know the names of many of the Eagle River High School soccer players, mainly from other sports I shoot at the school, but Kelly Cobb?  No clue.  So my answer to MaxPreps was:

“I do not have any, but I can have some Thursday the 21st, will that work?”

The emails went back and forth, and I learned a lot about Kelly.  Kelly is a senior at Chugiak High School and a soccer star.  She is headed to Duke this fall to play for the Lady Blue Devils and she is on the US U-20 National Team.  How did I not know we have a high school athlete like this in Eagle River?  MaxPreps is working on a story about Kelly, and their writer, who has been communicating with Kelly, her father and her coach, lets my photo editor know that Kelly has a big National Team thing coming up and so she probably will not play on Thursday.  Not going to play?  This wont work…not at all.  I shoot an email to Kelly’s father, hoping that maybe I can get about 10 minutes to shoot a sportrait session of Kelly, and he emails back saying that she is not going to play, but she will be there, in uniform, and will warm up with the team.  Ok…that is better than nothing.

We have had a really nice spring.  Monday I headed out to a ERHS soccer game, just to get my soccer grove on before shooting Kelly, and it was warm (50 on the field!), sunny.  Just nice weather.  Tuesday and Wednesday, more of the same weather.  Thursday I head up to Chugiak High School and it felt like it was going to snow.  The weather turned very cold, wind was blowing, it was absolutely miserable out.  The Mustangs come out onto the field to warm up and they are all wearing sweatshirts, huddling together, not looking like a team at all…just a bunch of cold high schoolers.   And there is Kelly…not in a Chugiak sweatshirt.  Not a Duke one…not even a Team USA top.  A New England Patriots sweatshirt.

So now, here I am…with a subject not looking like a soccer player, freezing, and not going to play….so, I do what I can.  I shoot Kelly goofing around with teammates, clowning around taking shots on goal, in a team huddle…well, games about to start, and my work is done here…looks like I will head over to Eagle River for the boys varsity game….

Kelly Cobb just took her sweatshirt off and is running out onto the field….

So I shoot only 5 minutes.  I really only need about 15 shots of Kelly.  I do not have to focus on any other player, and in the first moments of the game it appears that she is going to be touching the ball a lot.  And I learned something about Kelly.  She is good.  Real good.  I think the best way to describe her talent would be to say, she made the Bartlett defenders look like a bunch of middle school basketball players trying to guard Michael Jordan.  She was just silly good.

Watch MaxPreps for their upcoming story.