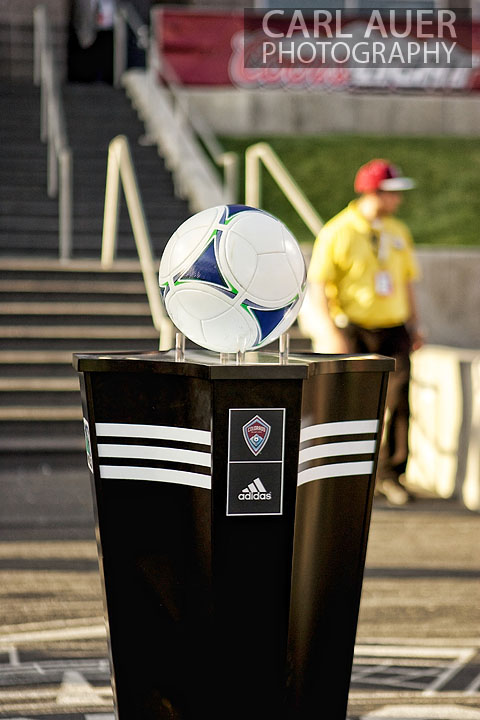 So after having a international friendly under my belt, it was time to head back to Dick’s Sporting Goods Park and shoot an actual MLS game.  And what a great game to start with, but a match between the home town Colorado Rapids and the team from the other side of the Rocky Mountains, Real Salt Lake.

This time, however, there were a lot more fans, many of which made the trip across the mountains to support the visiting team.  I need to get into a habit of watching for interesting fans.  There were quite a few there last Saturday night.

I tried to get a good shot of the teams coming onto the field being escorted onto the pitch by local youth soccer players, but I was shooting with my 24-70mm lens, when I should have grabbed my 17-40mm.  Live and learn…I did get a nice shot of the ball waiting for the game to start.

The game was very good, and very physical.  There was a lot of shoving between the players, and in the first half, a fight broke out, but the Rapid’s goalkeeper was right there to pull them apart.

I got my first chance to try out my new folding stool I mentioned in my Major League Friendly post.  It was great.  The drawback is, I over packed.  Besides my backpack, I went with my ThinkTank Photo belt system, and it was just too much to deal with.  Next game, no belt pack.

It is really fun shooting these players.  They are all so good.  I enjoyed shooting high school soccer in Alaska, but with the exception of players like Kelly Cobb, Kelsey Reeves (watch for this 2012/2013 college freshman goalie for the College of St. Scholastica), and Meg Byman, but having a team full of pros is just fun to shoot.

Yes, that ball in the picture was coming right at me, but I was a good 10 feet off the sideline and was pretty safe.  I got to meet a few more local photographers at this game.  Oh, the game, in the first half, Rapids midfielder, Joseph Nane scored his first career MLS goal to give the Rapids a 1-0 lead over Real Salt Lake.  That was all the Rapids would need to win the game and the Rocky Mountain Cup.

All the photos in this post are available for MEDIA use only.  Please visit Zuma Press to purchase your photos.

Oh, and my post game ritual?  Stop at Sonic for a Super Sonic Jalapeño Cheeseburger and a Large Diet Cherry Limeade to eat while I edit and caption my photos.