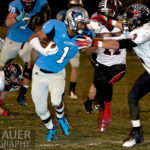 It took a little while, but by the time the game started, the stands were packed.  I would estimate there was close to 3000 people at this game with both home and away stands packed and lots of people on the sidelines.  This was the making of a big night for these teams.  After the pregame warm ups were complete and the coin toss had taken place, we were ready to kick off. 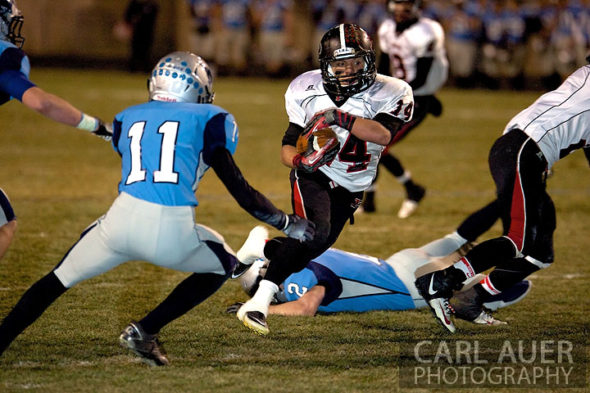 November 16, 2012: Pomona Panthers junior running back Chris Marquez brings the ball down the field against the Ralston Valley Mustang defense in the 5A State Football Quarter Final at NAAC

Pomona kicked off to Ralston Valley to start the game, and while everyone on the Mustangs sideline and stands fully expected RV to roll right down the field and jump on the board right away.  Throughout the playoffs, Ralston Valley has used an unstoppable run offense that has worked very well for them, but with Pomona wanting retribution for the loss earlier in the season, and since the Panthers have seen the Mustangs run offense earlier in the season, it was obvious that RV was trying to mix it up with more passing, and a different run offense than normal.  However, in the first series, with little movement down the field, RV punted the ball away.  After 6 minutes of no score football back and forth, Pomona shocked everyone by jumping on the board first on a 2 yard touchdown run by Chris Marquez.  After a good PAT, Pomona was up by 7 on the higher ranked Mustangs. 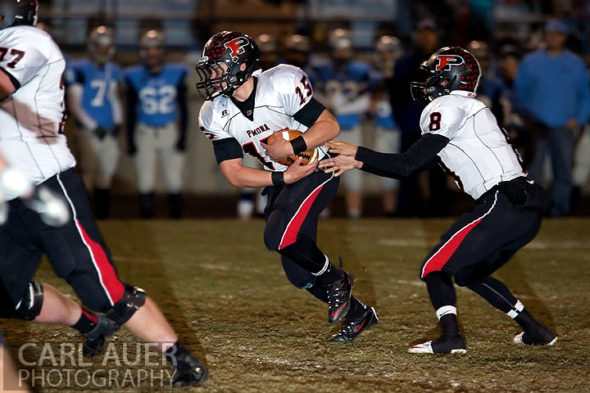 November 16, 2012: Pomona Panther senior quarterback Alec Feland (8) hands the ball off to running back Konner Burns in their game against the Ralston Valley Mustangs in the 5A State Football Quarter Final at NAAC

In the first few minutes of the 2nd quarter, Ralston Valley finally got on the scoreboard with a 1 yard touchdown run by Jacob Knipp.  But overall, the defense on both sides was really running the game.  Going into halftime, both teams were knotted up at one touchdown each. 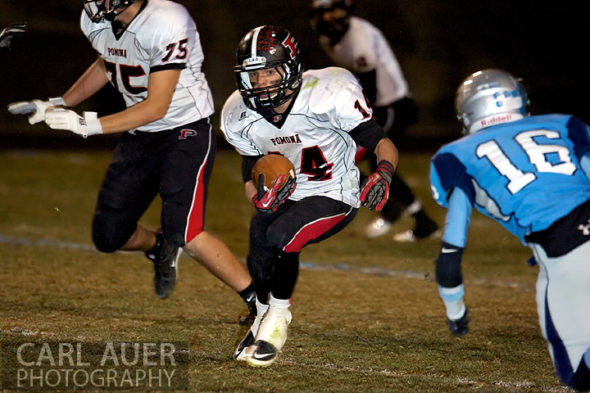 November 16, 2012: Chris Marquez (14), junior running back for the Pomona Panthers looks for an opening against the Ralston Valley Mustangs in the 5A State Football Quarter Final at NAAC

Starting off the second half, I do not think anyone in either set of stands were sitting.  Ralston Valley kicked off to the Panthers to start the 3rd quarter, and Pomona marched down the field and looked like they were going to take it right into the end zone, but a fumble in the red zone that was recovered by the Mustangs stopped that Panther scoring threat.  Ralston Valley started to march the ball right back down the field, but early in the series, Ralston Valley senior Carlos Gonzales was tackled from behind and fumbled the football.  However, unlike the Pomona fumble earlier in the quarter, the Mustangs were able to recover their fumble and retain possession of the ball.  Working their way down the field, the Mustangs were able to score on another Knipp 1 yard touchdown run.  After a good PAT attempt by Collin Root, the Mustangs had a 14-7 lead over the visiting Panthers.  The Ralston Valley student body was going nuts in the stands.  However, just a few minutes later, Pomona quarterback Alec Feland  connected with Hunter Hogoboom for a 12 Yd pass and with a good PAT by Allyson Thimsen, Pomona tied up the game 14 to 14 going into the 4th. 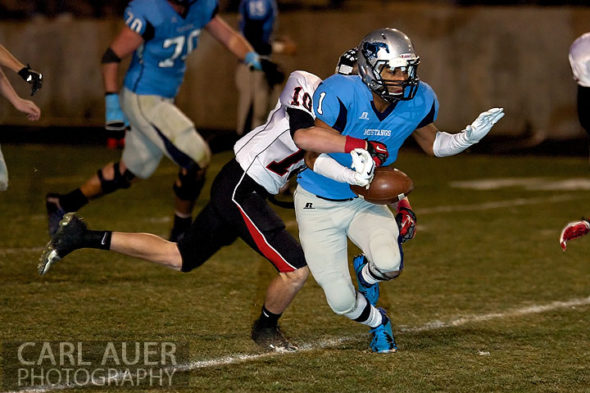 November 16, 2012: Mustang senior running back Carlos Gonzales (1) fumbles the ball as he is tackled by Panthers defender Scott Phillips in the 5A State Football Quarter Final at NAAC between the Pomona Panthers at Ralston Valley Mustangs. Ralston Valley would recover the fumble.

Both teams fought hard in the fourth and early in the quarter, Senior Justin Buys for Ralston Valley to a hard hit that sent him to the ground.    He apparently suffered a stinger, but as a precaution, EMT’s were called in and he was taken off the field and to the hospital for further evaluation.  After the 17 minute delay, the game continued.  With no scores from either team, and time running out, Pomona was trying to march the ball down the field for a chance at a field goal to take the lead.  Unfortunately, they could not make it down close enough for a field goal attempt, and Ralston Valley took over.  With time running out, Ralston Valley was looking at a 50+ yard field goal attempt.  They were able to get into the sub 50 yard range, but with time almost running out, they missed what would have been the game winning field goal wide left. 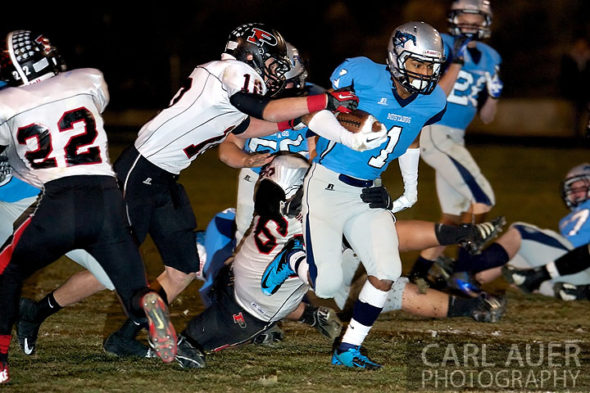 November 16, 2012: Carlos Gonzales (1), senior running back for the Ralston Valley Mustangs breaks through the Pomona Panther defense in their 5A State Football Quarter Final at NAAC

So, this quarter final game was going into overtime.  Ralston Valley was up first, and the Mustangs Andrew Wingard rushed in for a 4 yard touchdown and right after that Carlos Gonzales was able to scamper into the end zone for a 2 point conversion and an 8 point lead over Pomona. 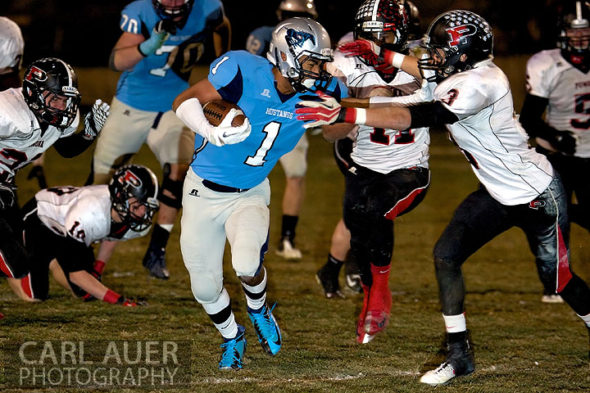 November 16, 2012: On his way to a first down, Ralston Valley Mustang senior running back Carlos Gonzales (1) stiff arms Pomona Panther defender Mitch Colin (3) as the #3 Mustangs would go on to beat the #6 Panthers in over time to advance to the 5A State Football Semi Finals

Next up, the Panthers lined up and Chris Marquez scrambled into the end zone for a 5 yard rushing touchdown.  Trailing Ralston Valley by two points, Pomona needed to score on this conversion to keep their future playoff chances alive.  The ball was snapped and Pomona was stopped but flags flew and Ralston Valley’s Jakob Buys, brother to the player taken off by EMT’s earlier in the game, was called for offsides.  This meant that Pomona just needed to move the ball one and a half yards for the tie.  But on the second attempt, they were denied access to the end zone by the Mustang defense.  Ralston Valley’s sidelines poured onto the grid iron in celebration of their 22 to 20 win over Pomona, and Panther players dropped to their knees in disbelief that their season was over.  Pomona finishes their season with a 9 and 3 record and were 4-1 in conference regular season play.  Ralston Valley will go on to play Cherokee Trail, the team that replaced the Mustangs as the #2 team in the state. 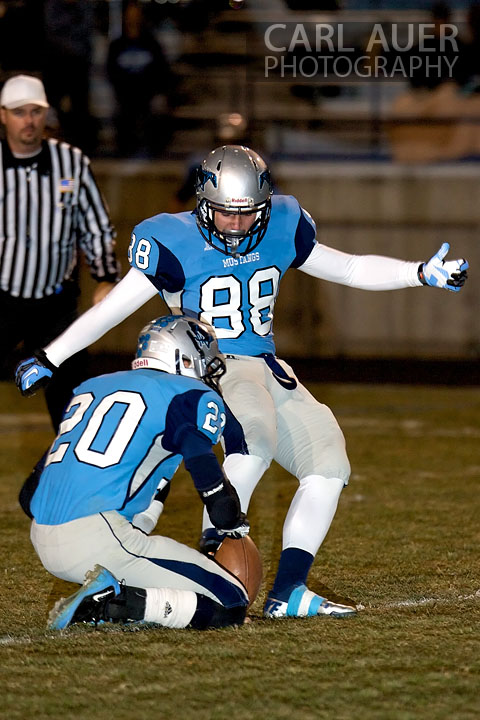 November 16, 2012: Ralston Valley Sophomore Collin Root (88) kicks a point after touchdown in their quarter final game in the 5A State Championship Playoff game against their cross town rival Pomona Panthers at a packed NAAC, in Arvada, CO Friday night.

You can find more photos from your team pages at MaxPreps.com.  Just click on RALSTON VALLEY FOOTBALL or POMONA PANTHERS FOOTBALL here to go directly to your team pages. 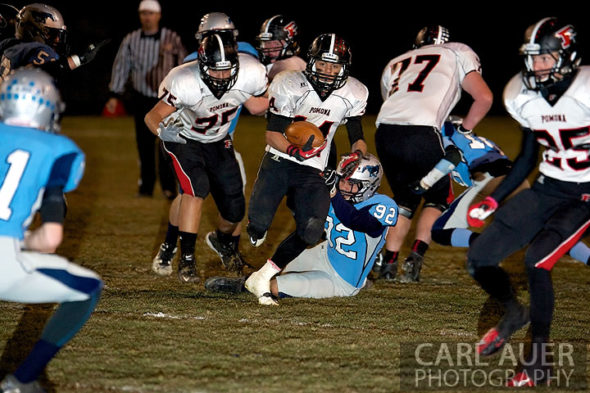 November 16, 2012: Chris Marquez (14), junior running back for the Pomona Panthers shakes off a tackle by Ralston Valley Mustang senior lineman Cameron Sawano (92) in the 5A State Football Quarter Final at NAAC

Congrats to the Pomona Panthers for their great football season this year.  It was my first experience with Colorado Football, and you were one of the first teams I photographed this year and you are an exciting team to watch play. 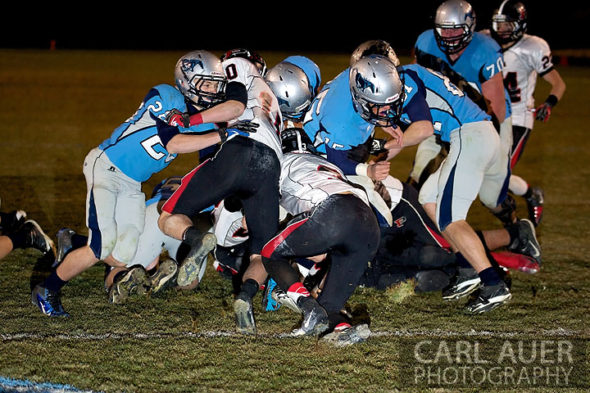 November 16, 2012: The Pomona Panthers defense tries to stop the Ralston Valley Mustangs offense in the 5A State Football Quarter Final at NAAC

The one thing I would like to see for next season is better parking management at NAAC.  When the game was over, there was a massive parking lot traffic jam.  It took me close to 45 minutes to get out of a parking lot that normally takes less than a minute to exit.  Maybe extra school busses so kids could ride to the game from their high school?  Big games like this a tailgate party in the school parking lot before the game for the kids would be fun, then everyone pile into busses to head to the game would cut way down on the parking issues when the game ends.  Just an idea…