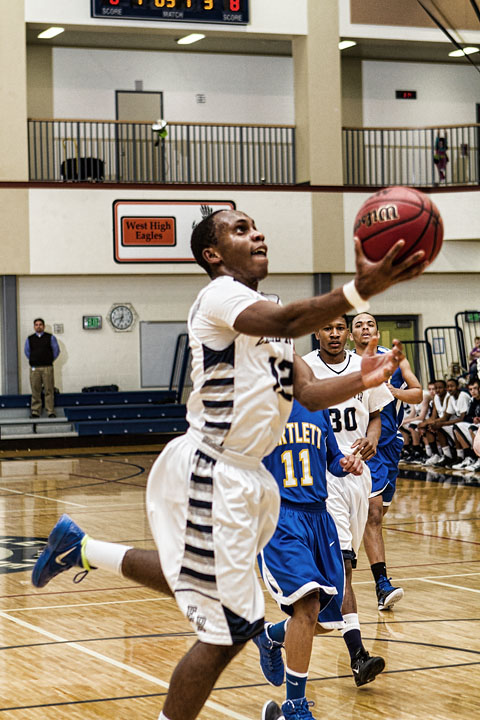 First of all, I hate senior nights.  I do not like goodbyes.  But we will touch on that later.

Then the third started, and Bartlett jumped out in front of the Wolves and never looked back.  The Wolves third quarter was filled with missed shots, few rebounds, and turnovers.  They regained their composer by the fourth and were able to match Bartlett shot for shot, but it was too late and Bartlett ran out of the Wolves Den with a 88 to 70 win.

That is all I will say about the game.  I want to focus on the 4 seniors who played their last home game Wednesday.

I do not really know Patrick Prior.  He was on JV last year, and I knew he was a three point specialist, and that is what he did on Varsity this year.  He has a nice shot, and I really do wish I could have watched him play Varsity ball one more year.

Senior Chris Parker transfered in this year and while I share my birthday with Chris, he is a fun player to watch.  From deep threes, to slicing into the lane for a quick lay up, to brilliant no look passes, and some phenomenal defense, Chris was just fun to watch.  I would love to have had Chris here all 4 years.

Senior Kevin Waterman played his second year of Varsity ball this year.  Last year I remember he was this skinny tall kid that was not a major force on boards.  He would get banged around pretty good by other teams big men.  This year, Kevin was fun to watch.  Crashing the boards, nice turn around shots, and consistently throwing down jams.  Hunter Hill has big shoes to fill as the big man in the middle next year.

The one senior from the boys team I will really miss will be Kelechi Madubuko.  I remember when I first met Kelechi.  He was a goof ball at the Mustang Round Up.  Goofing off, getting teased by Buron Bell and Darius Horton, and he came off to me as a little bit of a dork.  But then I saw him play, not basketball, but football.  And I remember saying to myself, this kid is good.  Kelechi has grown up quite a bit since I first met him.  Still does not have a dunk in a game, but if you asked me who was the most athletic kid at Eagle River was, I would have to say Kelechi is.  And like fellow football senior, OJ Hall, he is everyones friend.  Kelechi is a great kid who I will miss seeing play and talking to.

The girls also celebrated senior night which while it was a good by for Meaghan Byman, who I have gotten to know her and her family over the last few years, and will be sad once her soccer season is over, but Wednesday night saw the first game in uniform by Senior Paulette Mordini.  I was so disappointed when I saw Paulette keeping stats instead of playing this year, her first year with the team.  But she went to all the practices, and worked out with the team, so when it came to senior night, she suited up and started.  And you know what?  She did good.  Her defense was decent for someone who did not play basketball, she ran plays the way they were diagramed, and her only downfall was when she got the ball she had soccer feet, always moving and probably should have been called for traveling, but I was so glad to see her on the floor, and wish she would have suited up at the beginning of the season.